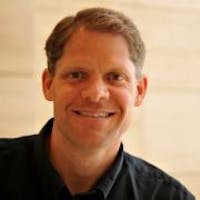 Grant Jensen is a structural biologist at the California Institute of Technology who believes that seeing can be the fastest path to believing. Seeing brings bursts of understanding at a single glance, even though those glances can sometimes be extraordinarily difficult to obtain.

Jensen works at the front edge of an emerging microscope technology called electron cryotomography (ECT). ECT combines an electron microscope beam, a cryogenic "plunge freezing" to fix the sample, and a motor-driven stage to tilt it, one degree at a time, through two axes while a charge-coupled device (CCD) camera reels off still shots of the sample. This river of images and positional data flow to a tomographic computer program, which merges it all and calculates three-dimensional models. With those, Jensen makes moving pictures of things once invisible.

Take, for example, the stator, or anchored portion, of the bacterial flagellar motor. Flagellar motors are a great natural wonder of biology: self-assembling nanomachines that spin a whip-like flagella, propelling bacteria like speedboats. Over the past 30 years, molecular biologists have labored to deconstruct the flagellar motor into its constituent parts and evolutionary origins. Yet no one had ever seen the stator, the part that holds the motor in place on the cell, in molecular detail. "A flagellar motor is like an electric drill, except it spins, not a drill bit, but the flagellum," Jensen explains. "But somebody has to hold the drill for it to work. Likewise, something has to hold the flagellar motor for it to spin the flagellum effectively. That's the stator." In previous attempts to study the motor, researchers had been unable to see the stator, since it was left behind, stuck to the cell.

Jensen made it visible. His group used the spirochete bacteria, Treponema primitia, which comes with a pair of flagellar motors. They ran a few dozen T. primitia through the full ECT process before computationally extracting, aligning, and averaging the images into a single, color-enhanced animation. It was the world's first glimpse of an intact flagellar motor in action, held firmly in place by 16 slightly tilted stators. The number of stators was a surprise. So was their structure. A third surprise was a protein collar in this type of cell, sitting atop the spinning rotor and acting as a bearing. Jensen makes the analogy to a car motor and to the difference between studying a box of engine parts and studying an assembled engine. "You can study each part in isolation, but eventually you're going to have to pop the hood and see how the whole thing works together."

Jensen collaborates with a handpicked circle of HIV and bacterial structural investigators. One of his HIV studies revealed that a key structural protein, Gag, thought to fully line HIV's inner membrane surface, instead forms large patches, "like the continents drifting on the Earth's surface," says Jensen. Another HIV study looked at the formation of the capsid protein shell that forms the core of mature HIV viral particles, called virions.

In other collaborations, Jensen's ECT lab has shed new light on one of the hottest issues in microbiology: Do bacteria have a cytoskeleton? The answer in any textbook more than a few years old is no. Bacteria are prokaryotes, say the textbooks, and prokaryotes don't have the cytoskeletal filaments and molecular motors of eukaryotes (organisms, like mammals, that have cells with a nucleus). The textbooks are being rewritten—thanks, in part, to Jensen's convincing images to the contrary.

Strong evidence for the existence of a dynamic bacterial cytoskeleton is pouring in from a variety of molecular and genetic experiments. Direct imaging, though, has been difficult. It's a matter of size and resolution, says Jensen. Microscopes that use light do an excellent job of tracking fluorescently tagged filaments moving about inside eukaryotes such as yeast. Yeast cells are about 6 microns across. Caulobacter crescentus, a favorite bacterial model, is about 0.4 microns in diameter. Fluorescent tagging and light microscopy have serious limitations in such close quarters, says Jensen. On the other extreme, atomic-scale x-ray crystallography can't be applied to cells. The resolution possible with ECT is nicely midrange, enabling it to catch the bacterial cytoskeleton in action. Furthermore, ECT captures shape as well as position. Collaborating with international microbiologists and computational biologists, Jensen's lab showed that C. crescentus cells are full of cytoskeletal filaments. Their 2006 paper in Molecular Biology (and video on Jensen's Web site) stirred up the entire field. According to Jensen, seeing the filaments for the first time produced some surprises: some were in expected locations; some were not or didn't appear as predicted.

Jensen is cautious about the scientific limits of ECT. Just because ECT, at its current level of development, hasn't yet revealed a structure or a mechanism in action doesn't mean that it doesn't exist, he says. ECT is a technology in progress—and an expensive one. That's why Jensen considers his becoming an HHMI investigator both an honor and a boon. HHMI's resources will help him push the boundaries of what is possible. Beyond the costly and ever-changing hardware, software, and service requirements, an ECT lab requires a strong cadre of biologist-physicist-computer scientists to run current experiments and to dream up the means for new ones. Becoming an HHMI investigator will help Jensen sustain and expand his expert team.

Jensen also has a passion for presenting biology in a visible and accessible format. He and his group have made animations that depict HIV maturation and bacterial motility, using the same technology used to make box office blockbusters like Shrek. Jensen firmly believes that giving the general public visual depictions of cellular biology will have profound consequences. "We (humans) are well equipped with our eyes and brain to understand complex objects moving in space," says Jensen. "Humans are wonderfully adept at making quick sense of what they see. Soon we will distill the essence of thousand-page biology textbooks into animations that even grade-schoolers will comprehend. Once everybody has a good sense of what is going on inside the cell, important national dialogues about biomedical issues will be different."