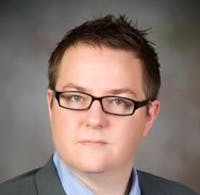 Dr. Jules White is an Assistant Professor of Computer Science in the Dept. of Electrical Engi­neering and Computer Science at Vanderbilt University. He was previously a faculty member in Electrical and Computer Engineering at Virginia Tech and won the Outstanding New Assistant Professor Award at Virginia Tech. His research has won 5 Best Paper and Best Student Paper Awards. He has also published over 85 papers.

Dr. White's research has been licensed and transitioned to industry, where it won an In­novation Award at CES 2013, attended by over 150,000 people, was a finalist for the Technical Achievement at Award at SXSW Interactive, and was a top 3 for mobile in the Accelerator Awards at SXSW 2013. His research is conducted through the Mobile Application computinG, optimizatoN, and secUrity Methods (MAGNUM) Group at Van­derbilt University, which he di­rects.

Through his research efforts in model-driven engineering, Dr. White became the project leader of the Eclipse Foundation’s Generic Eclipse Modeling System (GEMS). GEMS is a part of the Ec­lipse Modeling Project that also contains the Eclipse Modeling Frame­work (EMF). GEMS is dis­tributed by over 45 mirrors in North America, Eu­rope, Asia, and South America. The devel­op­ment of GEMS has been supported by industrial part­ners, such as IBM, Lockheed Martin, Ray­theon, and PrismTech.

In collaboration with Lockheed Martin Aeronautics, Dr. White has de­veloped highly scalable particle swarm optimization techniques for optimizing the deployment of software in real-time aeronau­tics platforms to reduce network traffic. Initial results from ap­plying his algo­rithms to a representative aeronautics platform have shown the potential to reduce network traf­fic by over 25% and overall hardware footprint by ~40%. Dr. White has also worked on dep­loy­ment modeling and optimization projects in the automotive and medical im­aging do­mains for Siemens AG. Dr. White’s current work on deployment optimization for multi-core processors is supported by the National Science Foundation, Lockheed Martin, and the Air Force Research La­boratories.