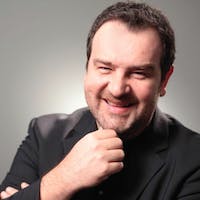 Darko Velichkovski began his music studies at the age of 7. After completing elementary, high school, and conservatory levels of Eastern European classical music education program with honors, in his native Belgrade (former Yugoslavia), Mr. Velichkovski received a full scholarship to the Juilliard School of Music and moved to the United States in 1984. He graduated from the Juilliard School in 1987, and later earned his graduate degree at the City University of New York.

As a classical and jazz clarinetist, Mr. Velichkovski has performed a wide range of repertoire on many of the world’s most prestigious concert stages– from New York City, Amsterdam and London, to Tokyo, Hong Kong, and Beijing. He has also performed with many music industry greats – from Pete Fountain and Leontine Price, to the Juilliard Orchestra and the New York Philharmonic.

His diverse projects have led him to collaborations and associations with a diverse range of international music industry businesses – live performance productions, from the Teatro Smeraldo in Milan, to the Milkweg in Amsterdam; recording productions, from Romero Records in New York City, to Polydor in London; and symphonic pop concert promotions and productions featuring a diverse spectrum of performers, from Faith Hill, Alison Kraus, Delbert McClinton, and The Chieftans, to Placido Domingo, James Galway, Joshua Bell, and the Vienna Boys Choir.

Mr. Velichkovski’s work in higher education (and his passion for pedagogy in the field of music business) stem from his genuine desire to share his knowledge, experience, and love for music (and the music industry) with new generations. It also stems from his deep conviction that to be actively involved in developing a strong and creative cadre of outstanding industry professionals is of the utmost importance for the well-being and future of the industry itself. To that end, since 1996, Mr. Velichkovski has been keeping a steady teaching, mentoring, and lecturing schedule alongside his music business and industry endeavors – from teaching at Long Island University, and consulting the Juilliard School’s electronic music program, to building and leading an Entertainment Industry Program at the University of Southern Mississippi and its International Music Industry Program in London, to building and leading London’s Middlesex University / SAE Institute Music Production Program in Belgrade.

Mr. Velichkovski joined WVU’s College of Creative Arts / School of Music in 2013 as the Director of the Music Industry Program.